I just thought I would post a picture of the pin cushion that I talked about in an earlier post. The lovely Blackbird Designs ladies have used our large walnut pin cushion for their bonus pattern in their recent release. A very cute addition to a stitcher's smalls collection. Back to work now. :) 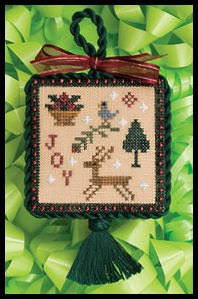 The new Just Cross Stitch Magazine (July/August) is now out and contains an ornament from Milady's Needle. It's called A Spot of Christmas and will be followed by the companion in the Just Cross Stitch Ornament Issue in September. Not sure why they chose to use lime green as a background...but designers don't take the pictures for the magazine spread. Ah well. Hope you like the new ornament.

Today has been a lazy kind of day. Although Rick was busy turning pin cushions, he stopped a bit early so that we could get take out and watch a ball game. I will be stitching on a new design, which is always hush, hush until it's officially released. Shops like to have them in house before customers start to ask for them. I may decide to give a sneak peak when I am further along, but that depends on when it actually gets done. :)

Hope you are all enjoying some time with family and remembering those no longer with us...especially those who have died in the service of our country. Have a safe holiday .

Gloria
Posted by SamplerNut at 7:02 PM No comments:

A book worth reading! 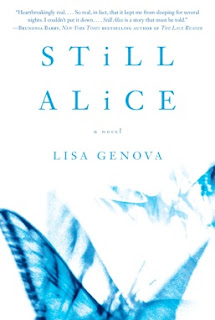 Last night I finished reading the book Still Alice by Lisa Genova. I couldn't put it down. My father has been diagnosed with Mild Cognitive Impairment which could move to Alzheimer's Disease in the future. This book gives you an inside look at what it's like from the perspective of the Alzheimer's sufferer rather than the care giver. Even if you don't know someone who has this awful disease, I highly reccommend reading this book! It's moving and eloquent. It will change how you view this disease and your own life.
On another note...we are working on turning pin cushions today. I help with the sanding and buffing when needed. I am also the quality control expert. :) After all the peasant in the workshop needs to turn to Milady's standard! :)
Have a fun day stitching!
Gloria
Posted by SamplerNut at 2:54 PM 1 comment:

An orament released at the Online Needlework Show 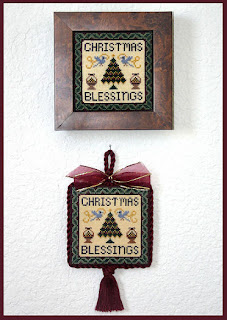 Although some of you may collect the Just Cross Stitch ornament issues, there are those that don't purchase this magazine. I have released this ornament from the 2007 JCS ornament issue so that those of you who don't have the magazine might be able to purchase the pattern.

I really enjoyed designing this one and I think you will enjoy the preview issue of the Just Cross Stitch Magazine which came out this month. It has a new ornament in it that will have another ornament in the JCS Ornament Issue that compliments it nicely.

Enjoy your stitching today.
Posted by SamplerNut at 5:23 PM No comments:

Here are the designs released at Nashville in February 2009: 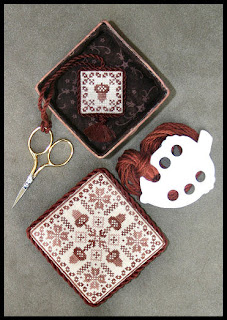 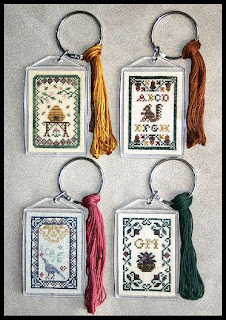 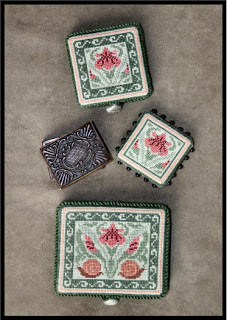 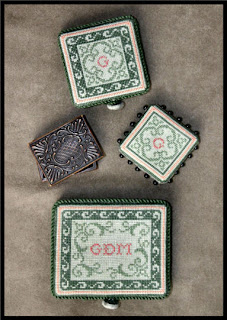 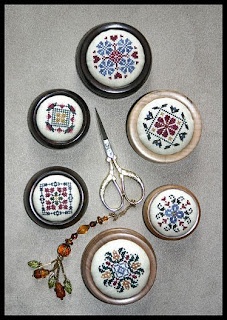 I am going to post as many of the designs not posted on the website untill we get that back up and running with all the designs listed. Thanks for your patience.

May your days be filled with stitching pleasure.

Posted by SamplerNut at 3:11 PM No comments:


So, I have figured out how to post pictures to this blog!! Yeah!!! I will have my husband put a link on my website to this blog so that those of you who are tired of seeing no new updates there, can see them here. :)

But I just have to put one of my older favorites is Needles & Pins: 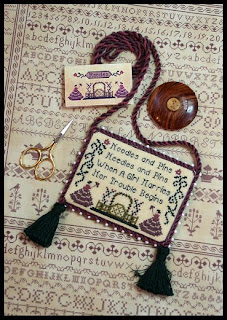 Posted by SamplerNut at 1:17 PM No comments: 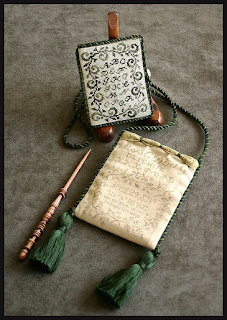 Today is my birthday! I woke up to two bouquets of flowers, two movies, a cake and a ton of cards. I have had calls from well wishers all day. It's nice to be remembered!

I am working on several new designs for the St. Charles Market. I hope to release a few in June, but I am not holding my breath. Lots to do and never enough time.
Hope you got a chance to see the new Loose Feathers pattern by Blackbird Designs. It really is a cute pin cushion. Would love to show you a picture, but I am still trying to figure out how to post a picture. Maybe I can show you one of my designs that was a show special last summer. If I can do that...then maybe I can start posting some pictures.

Happy Birthday to me!
Posted by SamplerNut at 6:23 PM 2 comments:

I am starting a blog with the hopes that maybe I can update you better by this blog than I can on my website which is woefully behind.

Things are just crazy at Milady's Needle. My time is stretched to the limit as is my husband's so the website had been placed on the back burner in favor of designing new things and hand turning wooden pin cushions. With the release of the new Loose Feathers pattern, the orders for Walnut pin cushion bases has hit the roof, so Rick will be busy until who knows when. So, hopefully I can let you know about new product here. This is an experiment, so be patient while I figure out how to post pictures.

Hope you have a wonderful day stitching.

Posted by SamplerNut at 9:44 PM No comments: