To Market, To Market to buy lots of charts!!

July and August flew by without my posting the news.  Of course there wasn't much to post as I was very busy with work related tasks...one of which is coming in just a few days.  The St. Charles Market is a week away and I am tying up loose ends so that I can hit the road on Wednesday the 22nd of September.  Much still to do, but I wanted to take just a second and give you a couple of sneak peeks at what will soon arrive at your local needlework shop.

The first sneak perk is of the new Yuletide Hornbooks design which is kitted with two designs, silks, fabric and hornbook.  You will get full view of this pattern after market on this blog.   I really enjoyed designing these and hope you will like them too. 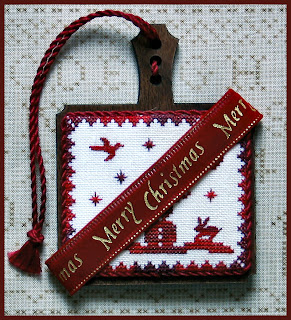 The second sneak peek is of my second reproduction sampler.  It is an American Quaker Sampler stitched by Margaret Brown and dated 1838.  Included with the pattern is a brief history of Margaret's life and pictures of the original sampler by Margaret.  Also included is a picture of Margaret's sister Sara's original sampler, which may or may not also be reproduced in the future.
How many of you out there would actually stitch a second sampler by a sister of the first sampler maker which is very similar to the one already published?  If there is enough interest I will reproduce Sara's Sampler.
Here is the sneak peek. 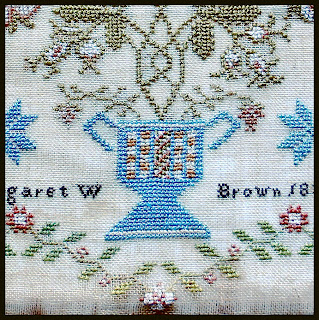 There are two more designs which will be debuted at the St. Charles Market, but they are out being framed as I type and I don't have a sneak peek for you right now.
The Bird's & The Bees is a part of the Sampler Motifs and Meanings series with motifs starting with the letter B.  The meaning of the motifs is stitched into the sampler.
Faithful Friends is a sampler which could be used as a memorial sampler for pets.  It's a cute sampler with a nice verse, so you don't need to include the name of your pet if you don't want to.  I put the name of a friend's pet that recently passed away on the model.  The verse on the sampler is part of a poem called "The Rainbow Bridge" written by an unknown author.  The poem is often used in reference to beloved animals who have left their owners all too soon.
I am looking forward to the market as I always do, despite the craziness before every market.  I will post more pictures after I return home.
Until after the market,
Gloria
Posted by SamplerNut at 2:31 AM 6 comments: