Life Is So Fragile

I was unable to attend Nashville this year due to my father's heart attack on February 9th and subsequent death on Monday February 28th.  I flew to Arizona on the 13th of February to be with him and help him in his recovery.  Although he bravely fought to get better, the complications of other health issues were just too much for him.  He died peacefully with his five daughters at his side.  We have lost a very special father and grieve deeply at his passing.  There is a special bond between father's and daughters and we will miss him very much. I was deeply saddened to hear of the loss of Lisa Roswell of Primitive Needle Designs on February 28, 2011.  I had dinner with Lisa at the St Charles Market last year and I found her to be a very warm and generous woman who had a great sense of humor.  I was looking forward to dinner again in Nashville, but I was unable to attend this year.  My heartfelt condolences go out to her family who I know are struggling with the senseless tradgedy surrounding her death.  I know that the needlework community has lost a wonderfully creative individual and she will be greatly missed by all who knew her. 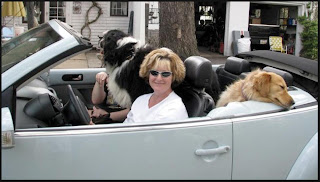 Life is so fragile.  Hold close those dear to you and tell them you love them every day.  You never know when they will no longer be with you.