As promised here is a news flash for the Nashville Needlework Market which opens this Friday. I have been hard at work coming up with new designs.  I hope you will like what you see.

This first new design will actually be released shortly after the Nashville Market.  However, it will be available for pre-order at the market.  It is a reproduction sampler entitled Milady's Manor. This piece was used as an inspiration for a project that I taught at the Attic Summer School last year. 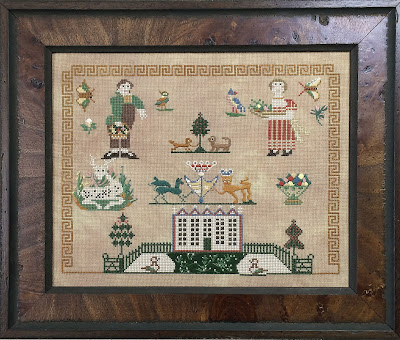 This is probably the most challenging sampler that I have reproduced.  While fairly easy to stitch the actual charting was the challenge.  I charted both the reproduction for those who are purists and an adaptation for those who prefer primarily Cross Stitch.  Enlarged color charts will help you reproduce this quaint sampler.  There is no name or other information on the sampler, but based on the condition and the place of purchase (England) I would hazard a guess that the original was completed C1800's. Robert Harris stitched the model and informed me it was a fun and fast stitch.  I personally love the choice of motifs which include a country estate home, a family crest and a two figures dressed in their best finery, bringing flowers from their garden. It's lovely quaint piece of history and I am curious about the girl or woman who stitched this sampler!

The next release is a pin cushion spool which I showed you a couple of days ago.  The design is called A Stitcher's Pin Spool. 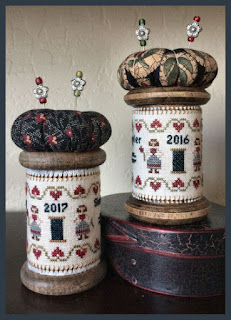 This design was worked on 40 count and the kit has all the supplies to make one pin cushion.  It is charted with both "Sampler Sisters" and "Stitching Sisters", so you have a choice on the wording.  The kit includes a chart for the design on 36 count (no fabric included), which will basically take off the top band.  The kit does include one spool and additional spools can be obtained from your local needlework shop. These spools are exclusively sold by Milady's Needle.  The pins in the pin cushion are also included in the kit and are made especially for this design by Kim Lewis of Kim's Needle Needfuls.

Two more kits with spool designs are also being released at the market.  Christmas decorations are popular all through the year, so these next designs will appeal to those who like to get an early start on their Christmas gifts for friends of for their own tree. 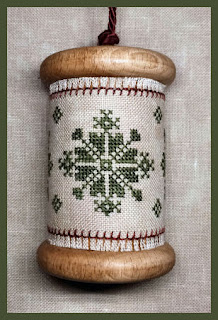 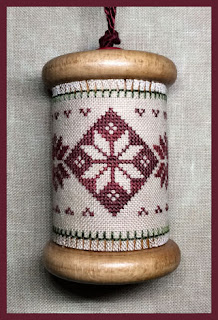 The first is entitled Quaker Christmas Spools. The kit comes with enough supplies to stitch both designs.  One spool is included and additional spools can be obtain from your local needlework shop.  The tops of the spools have buttons from Just Another Button Company which are used to aid in the finishing. 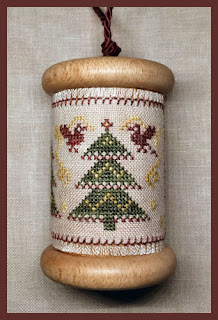 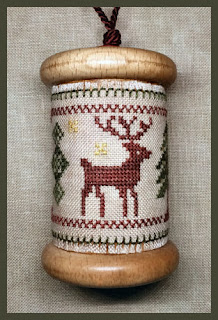 The second is entitled Joyful Yuletide Spools.  Again the kit comes with enough supplies to stitch both designs.  One spool is included and additional spools can be obtained from your local needlework shop. Below see the entire design.

This last items being released at the market are gift items.  I have a sampler in my collection that has a verse on it that is my favorite sampler verse ever.  I am going to reproduce the sampler at some point, but just now I am producing note cards and notebooks with a photo of the sampler with the verse visible.  The sampler was stitched by Mary Cubitt and probably finished in the year (1770) which is stitched on the sampler. 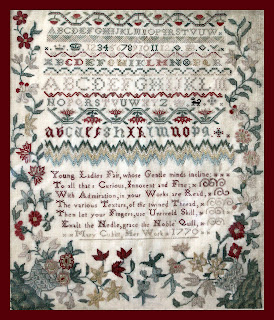 
Young Ladies Fair, whose Gentle minds incline:
To all that's Curious, Innocent and Fine;
With Admiration in your Works are Read,
The various Texturs, of the twined Thread,
Then let your Fingers, use Unriveled Skill,
Exalt the Nedle, grace the Noble Quill. 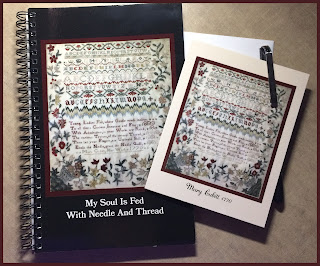 Mary Cubitt's  Note Cards and Notebooks are sold separately.  I hope you enjoy looking at this sampler and that each time you open the note book or send a card you will think of Mary doing needlework or writing notes to her friends so very long ago.

That's the market report for Nashville 2017.  If you like what you see, be sure to talk with your local needlework shop about ordering these designs.  Most needlework shops go to market with a list these days and they count on you to let them know what you want them to bring back with them.  They are busy compiling these as I type.

All the best and until next time...