I thought I would take a moment away from my needlework market preparations for a quick note to give you the news from my little corner of the world.  Getting close to a year now since I last posted, but I guess a few things have happened for Milady's Needle since then.

Last July, I taught in La Crosse, Wisconsin for Crosse Stitchery and Main Street Framing owned by Sarah Hall.  This group of ladies were the first to have a chance to stitch a new design before it's release.  This new spool pin cushion design is going to the Nashville Needlework Market in just a week, so here is a picture of the design entitled "Sampler Sisters Pin Cushion". 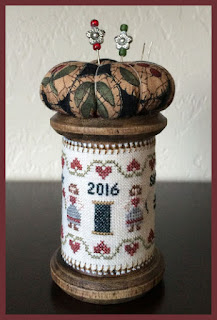 The class afforded the opportunity for participants to learn the finishing techniques for this design and included making the pin cushion top and Bri-Waxing the spool.  We had a lovely day for the class and did our work on the spool outside.  I think that the class participants had a wonderful time; at least there seemed to be a lot of smiles and much laughter while working.  I know I had a delightful time with a great group of ladies as we shared our love of stitching.  I look forward to returning for another class someday.

I have updated this design for 2017 and included a chart with the words "Stitching Sisters Pin Cushion". Since there are some needleworkers out there who don't particularly like samplers; I thought I would make the design more inclusive of all who love to stitch.  Also included is a chart for doing the design on 36 count for those who don't like to work on 40 Count fabric.  I will post a picture of the other pin cushion with the rest of the Nashville Releases later this week.

In August I taught at the Attic Needlework Shop for Jean's Summer School.  Once again eight designers who live in the Phoenix area came together with a wonderful selection of projects for those stitchers who love samplers.  Each year the projects seem to get better and better.  I found a wonderful small sampler at the last Nashville Needlework Market and I used the motifs to develop a stitcher's sewing book.  I really challenged myself with the finishing part of this project, but in the end it was worth it!  The design is called "Milady's Manor Sewing Book".   The class participants were very patient with me as I explained the finishing process.  I was given some great ideas for future books like this from a few women who know their way around a sewing machine better than I do.  I can say without a doubt that I have a love hate relationship with my sewing machine and the details of my adventure provided a few laughs for the class. 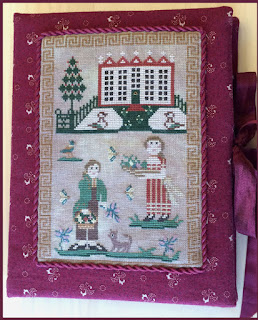 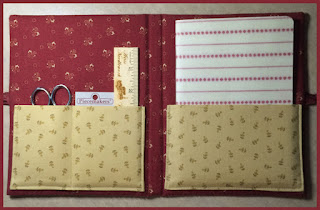 Inside of Milady's Manor Sewing Book

From the feedback received, I think this project will be one that I can teach in other venues and it will be available for classes after August this year.  As part of the Summer School offerings in 2016, participants received a copy of the full sampler in addition to the project developed by each teacher. Unfortunately due to circumstances related to the health of a family member, my larger sampler for Summer School was not finished.  It is now in the process of editing and printing.  It will be ready to send out to those who participated in Summer School at The Attic as well as finding it's way to the Nashville Needlework Market next week.  So those of you who thought you might never see this sampler...never fear...it will soon be on it's way to you.  I have to be honest, the sampler has been a challenge to chart and I have had to invent some stitches in my charting program in order to complete the reproduction.  I do think you will be happy with the results though.  The chart will have a true reproduction using all the stitches used in the original as well as an adaptation using only Cross Stitch and Tent Stitch.  When I post the 2017 Nashville releases in a few days you will see the end result of a lot of hard work.

I will be back in a few days with the market new releases.

Until then...keep those needles busy.

Gloria
Posted by SamplerNut at 4:43 AM